The Scent of British Spirit, Part 1: Penhaligon's and The Reinvention of Heritage

Is there a ‘British spirit’ in perfumery? With so many of our fragrances originating in France, why are so few home grown? A possible answer is that we, as a nation, are less avid fragrance wearers than our European neighbours. Within my own social circle and family there are folks who would only don a spritz of fume when making preparations for a night out, rarely bothering with scented adornments as part of their daily wardrobe. It simply isn’t a National obsession unless you count the hoards of teenagers sporting the latest celebrity concoction (although the online presence of the niche fragrance community has sparked a recent wave of interest that appears to be growing rapidly).

Another feasible answer could be that the source of many perfumery ingredients originate in France, with floral absolutes abounding in Grasse and innovations in synthetics being created by companies such as Firmenich.

Whatever the reason, we associate the notion of ‘French’ perfume as being essentially, luxurious, sometimes decadent and of exceptional quality, essentially – the best.

Despite the seat of fragrant power reigning in France, I believe we do have our own identity in Britain. I see our industry as falling into two distinct territories: The first of these being ‘The Historics’ e.g. Penhaligon’s, Floris and Grossmith who can be thought of as creators of fine fragrances and toiletries, each with at least one Royal Warrant and over one hundred years of trading. I imagine this is how tourists who adore our Royal Family and travel to see Big Ben view Britain i.e. steeped in history, class and tradition.

A friend hailing from my teenage years came from a ‘posh’ family. On her ornate Victorian dressing table sat a great many fragrant hand-me-downs from her stepmother. Amongst these were Penhaligon’s Bluebell and Lily of The Valley by Floris. Both scents remind me of Sarah’s grand house and the rather stuffy atmosphere of Middle England. That said, taking a bath with their decadent oils and lotions was quite wonderful.

The second category could be considered ‘The Indie Spirit’ where independent perfumers have created small lines with limited distribution and the DIY ethic that comes with the lack of major commercial backing. Britain leads the world in the indie music scene with bands on tiny labels creating masterpieces of originality appreciated by ‘real’ music aficionados. Likewise, small indie fragrance companies such as Miller Harris and Ormonde Jayne and really small lines from Ruth Mastenbroek and Sarah McCartney of 4160 Tuesdays have gained cult status, with the last two being stocked by London’s ultimate retail shrine for fume junkies – Les Senteurs. In itself Les Senteurs reeks of indie spirit. With it’s delightfully playful atmosphere, hugely knowledgeable sales staff and enormous range of quirky fragrances, it’s absolutely opposite to Harrods snooty rarefied atmosphere. If I lived close to London I’d probably visit weekly and most definite beg them for a job.

In part 1 of this exploration of British scent, I’ll discuss Penhaligon’s and ponder the enormous shift in marketing and mood. Part 2 (coming soon) will take a look at Grossmith and Floris and the idea of ‘the scent of royalty’. Part 3 will reveal the DIY-ers and their contribution to the world of niche.

Established in 1870, Penhaligon’s is one of Britain’s oldest perfumeries. Although concessions exist large stores, Penhaligon’s boutiques exist in towns associated with wealth, heritage and tourism such as Chester, Edinburgh and Cambridge in addition to plentiful London locations. As the proud owners of two royal warrants, they have historically traded as a luxury brand for those with an appreciation of heritage and quality raw materials. I can hear you yawning. Stifle the boredom and read on as change has occurred..
At some point recently, a very clever thinker has turned Penhaligon’s from ‘posh shop’ into ‘niche Brit darling’. Their website states:

“Our fragrant adventure began in the Victorian era of decadence and carries us into the future as we strive to create original scents for the discerning eccentrics of today. True modern dandies and bold women who are proud to go their own way. .” penhaligons.com

In essence, this means that they are holding onto their quality products but having a great deal of fun poking fun at the notion of heritage and poshness (yes, I know that’s not really a word but I am a Northerner and it means something to us). Embracing the daft manners of stuffy old Britain, they have injected a huge dose of humour into their marketing and encouraged customers (who might now be ‘commoners’ who simply love perfume, the chaps and chappettes who appreciate a little comic eccentricity) to get involved with social media and communicate via reviews and commentary on the website.

Some cheeky snippets of smelly fun currently gracing the website include:

Perhaps my favourite tongue in cheek touch is the ditching of stars to indicate popularity. Instead they have a star rating with moustache icons, genius!

In addition to the shift in mood, there is a change in the actual products. Classics such as the infamous Bluebell or the magnificent eau de cologne – Douro will remain eternal. However, perhaps influenced by sister company L’ Artisan Parfumeur, the fragrances are becoming much more artistic and brave. Employing the services of highly creative perfumers such as Olivier Cresp and Bertrand Duchaufour, the fragrances are moving into distinctly niche territory.

If you take a tour round the Penhaligon’s website, there is much to play with for the ardent fume junkie. Each scent’s page delivers plentiful information including detailed note descriptions and historical information. The ‘journal’ area is an intimate blog that invites us into their world, a welcoming place, even offering us ‘stories’ (see new release ‘Vaara’ for a video and wonderful drawings from Duchaufour’s own sketchbook). As a Penhaligon’s customer, you feel connected to the products, as if you know them without even smelling them. I imagine that more companies will try to emulate this intimacy as it definitely builds curiosity and enchantment.

My sample set included a range of scents from the historic to the new. Here are some of my impressions:

Penhaligon’s most popular historic scent is the 1902 creation, Blenheim Bouquet.

“An aristocratic citrus, dry and aromatically anchored with woods and lavender, Blenheim Bouquet takes it inspiration from the iconic Blenheim Palace in Oxfordshire, the ancestral seat of the dukes of Marlborough whose illustrious descendants include Sir Winston Churchill.” Penhaligons.com

With references to royalty, power and the implication of genteel masculinity, this scent certainly possesses the aristocratic heritage that we find in traditional British perfumery. But can it be worn by a Guardian reading, left-leaning, feminine (ish!) fume junkie such as myself? Yes, despite my long standing ex art school ethics I can ‘posh-up’ and accept the snooty whiff with great enjoyment. This is how it wears:

Initially, a prominent lemon and lime note effervesces, providing a citrus stimulant in the tradition eau de cologne style. Underneath lies a peppery sharpness that complements the refreshing top notes of the scent with a little longevity. Further into it’s wear, a markedly natural combination of woody herbaceous notes mingle together to give an oddly ‘savory’ feeling. Within this savory blend are clear whiffs of lavender, pine and rosemary and although they aren’t actually there, I also smell thyme and oregano, with an atmospheric nod to Mediterranean cuisine. I don’t really smell any muskiness as listed in the base, nor any hint of warmth or sensuality. Although it’s not amongst the most exciting scents I’ve smelt, it’s certainly a great ‘classic’ masculine that would be appreciated by those who adore Guerlain’s Vetiver or any in the manner of ‘clean and natural’.

More symbolic of Penhaligon’s quirky new identity, is the delightful Sartorial. Created in 2010 by the much revered Bertrand Duchaufour, this fragrance is appealing to both my nose and my appreciation of creativity in story telling. I was amazed to see that they sell Sartorial scented 'beard oil' and thought of the trend for fulsome beards amongst Manchester's young Creative community. It would make a fabulous gift for an arty chap who I imagine is probably one of Penhaligon's current target market. 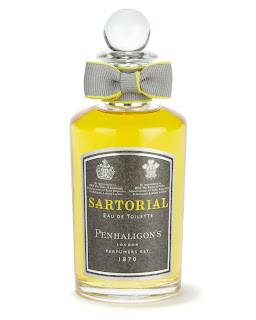 “Sartorial is a contemporary interpretation of the fougère family of fragrances, a line of rich masculine scents tracing a lineage back to the original Fougère Royale made in 1882 by Houbigant. In Sartorial, the classic fougère notes of moss, tonka bean and lavender have been exquisitely stitched together with woods, leather, violet, honey, musks, ginger and black pepper. The thread running through Sartorial is beeswax, echoing the blocks of wax each thread is run across before stitching. This sweet smudged note ties together beautifully cut notes designed to create the perfect illusion of a tailor’s workroom – metal shears, steamed cloth, tobacco-tinted cabinetry, tailor’s chalk, dust and vintage paper patterns.” Penhaligons.com

Appropriate to the brand, it references history (Saville Row and the British tradition of gentlemen’s tailoring) and adds some contemporary quirk via the inclusion of the olfactory imagery of tailor’s tools. It’s not just PR blah, you can genuinely detect the metallic facets of shears, the laundry-esque sensation of a hot iron searing steam into fabric and most prominent of all – the beeswax. I use natural beeswax for candle making, in here I can smell the wax as it liquefies at melting point, a warm and almost ‘muggy’ smell as if it’s animalistic scent is smothered by heat.

On my skin, the lavender and tonka/coumarin notes reside with equal billing amongst this waxy whiff. Leather additionally has a very brawny presence which renders the scent rather sensual. Towards it’s closure, a sweet, almost gourmand nuance is apparent with tonka and honey welding into gloopy delight. It does, without doubt, remind me of Faberge Brut, the most memorable Fougere for my generation. Before you baulk at ‘Brut’, try to ignore the memories of your Dad’s ablutions and ponder what it actually smelt like. It was good, damn good! Sartorial however, is a much subtler interpretation of the Fougere. Imagine that Brut is a full orchestra reaching the clanging crescendo of a gung-ho marching composition, Sartorial is the part where all the other instruments fall silent and the wood wind section delivers a cheeky scamper through the melody.

To further highlight the contrast between the ‘old and new’ of Penhaligon’s, take a look at the packaging of their beautiful samples. On the reverse of Blenheim Bouquet, we see two icons signaling formal royal warrants. Whilst on the reverse of Sartorial we see a continuation of golden waxed thread leading to a tiny sewing machine. Sartorial clearly carries connotations of conceptual perfumery with a hint of humour and a great deal of creativity – exactly what we’d expect from Duchaufour.

I chose to talk about the more masculine side of Penhaligon’s here, partly because they are very good at men’s scents (I think both detailed here are a moustache too far to be considered gender neutral) and partly because I haven’t had the opportunity to delve my nose into many of those suitable for sharing or feminine wear.

In summary, my preconception of the brand's stuffiness has been thoroughly shattered. I look forward to trying Vaara, their new oriental release which promises to be a romantic oriental in the contemporary style i.e. More ‘travel’ than ‘Victorian tour’.