Winning a prize draw is thrilling. Even when it’s just a little sample that’s affordable to buy in the first place. There’s something about seeing your name appear on a winners list that feels deliciously victorious.

The fortuitous win of a sample set from The January Scent Project lifted my scorched mood, as that morning I’d awoken to discover that part of my outbuilding roof had been stolen. Creator John Biebel’s generosity went someway to rebalance the bad karma instilled by the cretins that pinch anything made out of desirable Yorkshire Stone around these parts. I’d planned to spend the rest of the day sitting out back in a deckchair with a rusty rake in hand in case they returned for the rest of the roof. I saw sense and shelved my plan. 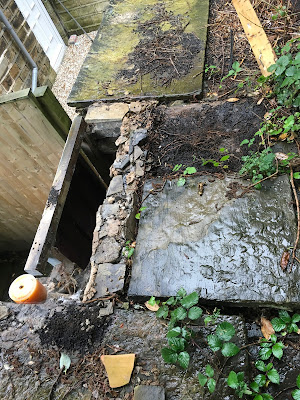 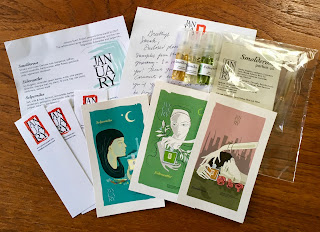 The January Scent Project is a line of three unisex fragrances created by John Beibel, an Artist from the USA who is well known amongst the fragrance community for his regular columns at Fragrantica. Each of the three fragrances has a corresponding artwork which has been published in the form of gorgeous little postcards.

“The "vintage" artworks for the perfumes was a really fun side project that I wanted to include as part of the creative process. The idea that I could envision the scents in a different time context was so appealing, and it kind of plays on both the timely and timeless, if you know what I mean.”

I know what he means.

My favourite of the three scents - Eiderantler is certainly ‘timely’. It feels neatly into the current resurrected trend of the aromatic fougère genre and yet could easily invoke a spirit of the seventies when airy outdoorsy scents such Alliage and Diorella graced our tanned outdoorsy skin. 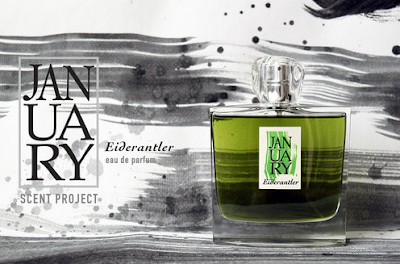 Eiderantler is described as an ‘Ivy fougère’. Fougère translates as ‘fern’, a term used to categorise fragrances that contain green notes associated with nature, they tend to feature lavender and coumarin (a derivative of tonka bean). Here are the notes for Eiderantler:

Ivy is essentially an abstract composition, a clever combination of ingredients that create a cool and crisp atmosphere reminiscent of dewy woodland foliage.

What struck me about Eiderantler is it’s vibrancy. Lavender rich scents have a been a trend in recent years with Chanel - Boy (an elegant version of Brut) and Guerlain - Mon Guerlain (muggy sugared lavender) being perhaps the most discussed releases. Both of them feel ‘dull’ to me. Not dull as in boring, but dull in the true sense of the word in that any sparkle or radiance has been eroded. Eiderantler feels sparkly and volatile. It hasn’t been mugged by the blanket of tonka bean that so often occurs in a fougère  I asked John how he created the sparkle effect and received a wonderfully detailed answer:

“In answer to the question about "sparkle" I attribute that to a few different things. There are a number of small elements in the perfume that add a nice touch. In this case, a small bit of ultrazure, a mixed aquatic/air molecule that has a very bright and faceted quality, and other small bits like templin fir cone (which is like a bright pine lemon), pink pepper (which has a lot of sparkle.) There are some key ingredients that help this all along too, primarily champa or champaca leaf. It's related quite closely to magnolia and to the magnolia flower (also known as champaca flower, usually imported from India.) it shares a fairly primary component that is found in a number of greens and flowers called linalool. It's an incredible substance, which has a scent somewhere between lemon, pepper, orange flower and very gentle wood. That, I believe, is at the heart of the perfume and helps it keep its sparkly quality.”

If his paintings are indicative of personality, I imagine that John is a sparkly man. Whilst his artworks vary significantly in subject matter and medium, the character that links each of them is an energetic vibrancy. These hurried brushstrokes and clashing colours certainly speak of a man that fizzes at great speed! 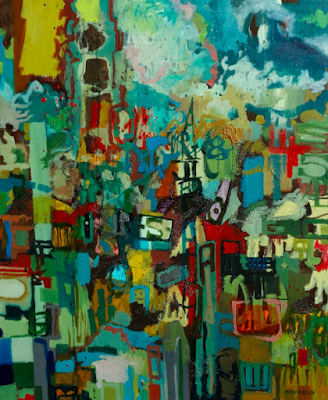 I shall stow away my sample of Eiderantler until the 29th of October. The occasion upon which the clocks move forward in the UK. When the first dark night of the season closes in I shall spritz myself with Eiderantler and be transported to a forest where dappled light graces my skin.

You can discover The January Scent Project by clicking here.
If you love to sparkle you might also enjoy reading about Clinique Wrappings and Perles de Lalique.