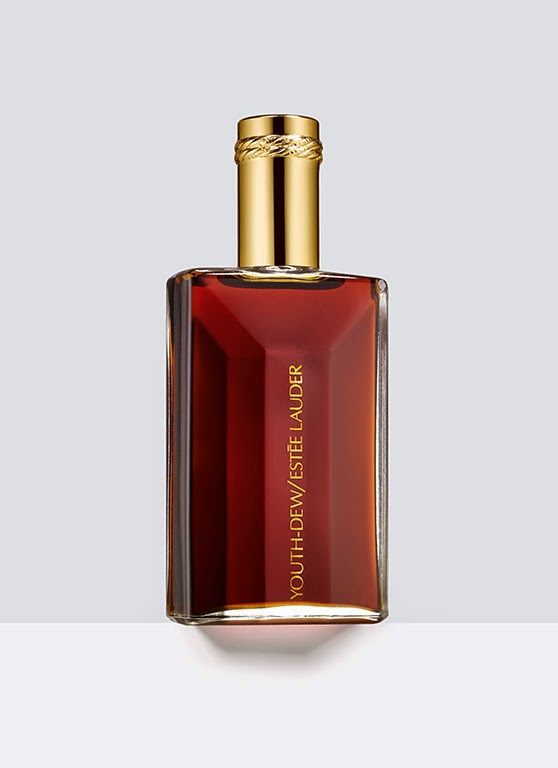 Unheard of, unless you’re an Estee Lauder aficionado.

For the third time in my life, I recently felt the need to make a purchase of the enchantingly autumnal balsam that is Estee Lauder’s classic Youth Dew. However, the purchase of bottle number three was tainted by the knowledge that it had suffered significantly through IFRA’s great perfume cull. Was it worth revisiting?

Youth Dew was responsible for some of my earliest fragrant memories, being a favourite of my frequently glamorous mum. We lived in the countryside. This meant that mucky wellington boots, ancient trapper hats and grubby anoraks that stank of our ‘outdoor’ Labradors were our regular attire. So when mum got glammed up, she ditched the countryside gear and really got glammed up.  In the eighties, the decade of my most influential fashion memories, she was fond of silky black flying suits and vertiginous heals. Her sleek auburn waves were set in huge Carmen rollers and her sharp cheekbones wore the vibrant blusher of the era of uber-make up. To finish it off, just a couple of sprays of Youth Dew were applied (which was all it took to asphyxiate a room of party goers). I associated perfume (and in particular Youth Dew) with glamming up and going out. It speaks of the adult world, a perfume to grow in to.

My mum is still gobsmackingly glamourous, very much capable of pulling off a Jessica Rabbit style column dress with great style at the age of 71. Though nowadays Clinique’s classic chypre - Aromatics Elixir adorns her dressing table.

While pondering purchase number 3, I made the discovery of the existence of Youth Dew Bath Oil. Of course I’d heard of it before but I thought it was one of those vintage objects of desire that sold for extortionate amounts of money to collectors on Ebay. Which it is. But thankfully, it is also a current product that retails at an astonishing £25. That might sound a lot for 30 mls of bath oil. But it isn’t really bath oil. It’s a pure, brawny and sensational perfume. Guerlain would call it a parfum extrait and sell 30 ml of it for £210. 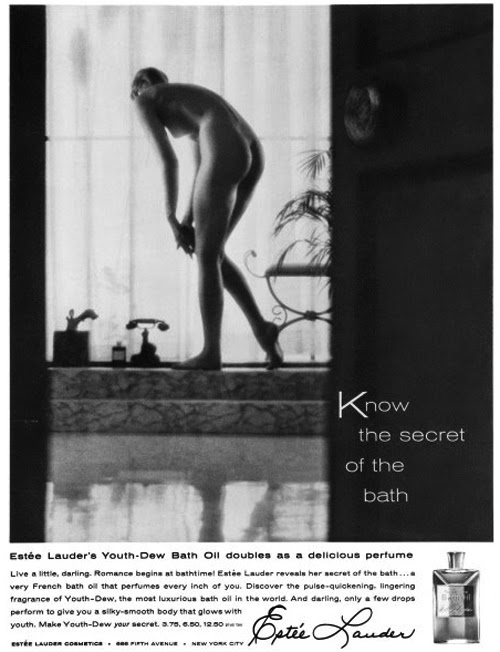 Sadly, it doesn't create for you a bum like this one

Estee Lauder initially released Youth Dew in bath oil form in 1953, speculating that American women would be more inclined to purchase a hygiene accessory than a fragrance. Fragrance was still something that a man would buy for you, too decadent to purchase yourself. She predicted correctly and sold an unfeasible amount of bottles. 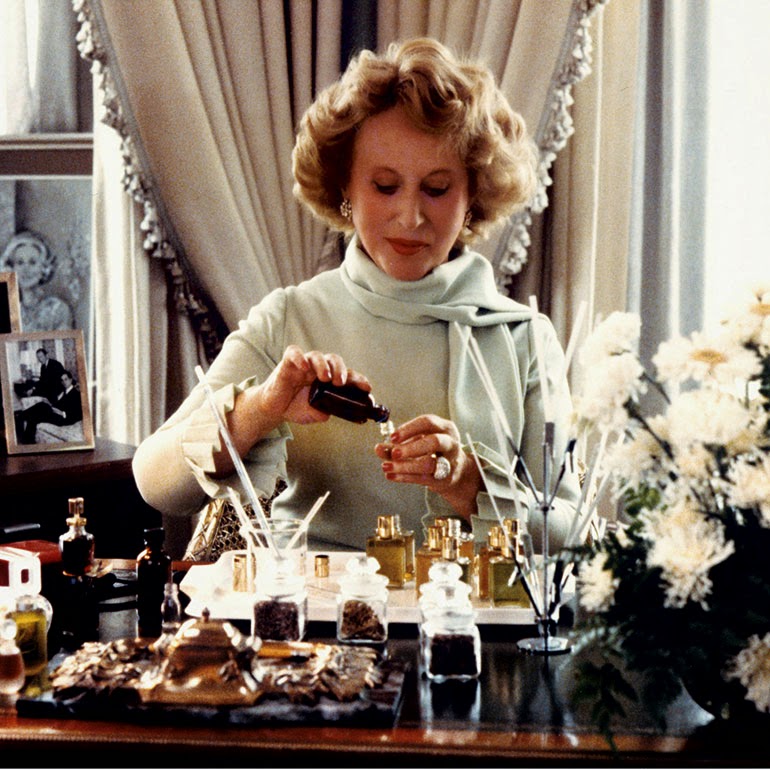 A rather prim Ms Lauder faffs about with nice bottles

Still in pondering stage, I asked a question to my online scent buddies at the ‘Facebook Fragrance Friends’ group. What’s the difference between the EDP and the bath oil? The response was rapid and mammoth. They loved it. Members spoke of it’s multiple uses, as a bath oil (just 2 drops required to fill your apartment with it’s heady whiff), dabbed neat onto the skin in the manner of an extrait, rubbed into the tips of the hair for an animated scent trail or burned in an aromatherapy ceramic. I’ve since tried all of these tips and they were highly effective. Thanks chaps.

So how does it smell? Like the Youth Dew of my own youth; decadent, oily, spicy, burnt, opulent, edgy, piercing, sweet, animalic, camphorous, exotic and exceedingly grown up. If you removed the bright, powdery and soft elements of the current EDP, you are left with the bath oil, which is sticky, dark and as rich as bonfire toffee.

According to Fragrantica, the notes are:

My nose reads these notes as most prominent:

Essentially, Youth Dew is an untamed oriental that should be sought out by anybody who has not been near an Estee Lauder counter in years. For the ‘niche only’ crowd (particularly the boys) who are currently showing an interest in Lauder’s Wood Mystique and Amber Mystique, you really should try and persuade one of the Sales Assistants to ditch the tester of the EDP and let you have a whiff of the bath oil which will inevitably be under the counter in the long forgotten sample draw. They might even look a bit confused and not know what you are on about, persevere.

Whilst you are there, be sure to sample Estee and Knowing, for two immense chypres in the grand dame style.

My only concern with Youth Dew is that it was incredibly popular with generations of women, to the extent that at some point you will recognise someone's mum or grandmother in it's retro cloud. Whilst I take great pleasure in smelling like my own mum, I do worry that I may smell akin to the mother/grandmother of my next lover. At best this could result in the misconception that I might do his laundry for him, at worst, it could induce a serious oppositional effect to Viagra...

Tales Of My Scent Memories, The Library Of Fragrance Pose Some Questions To Me

If you'd like to read about my childhood stone sucking habit and a wood that stinks of onions, head over to The Library Of Fragrance who interviewed me for their blog. 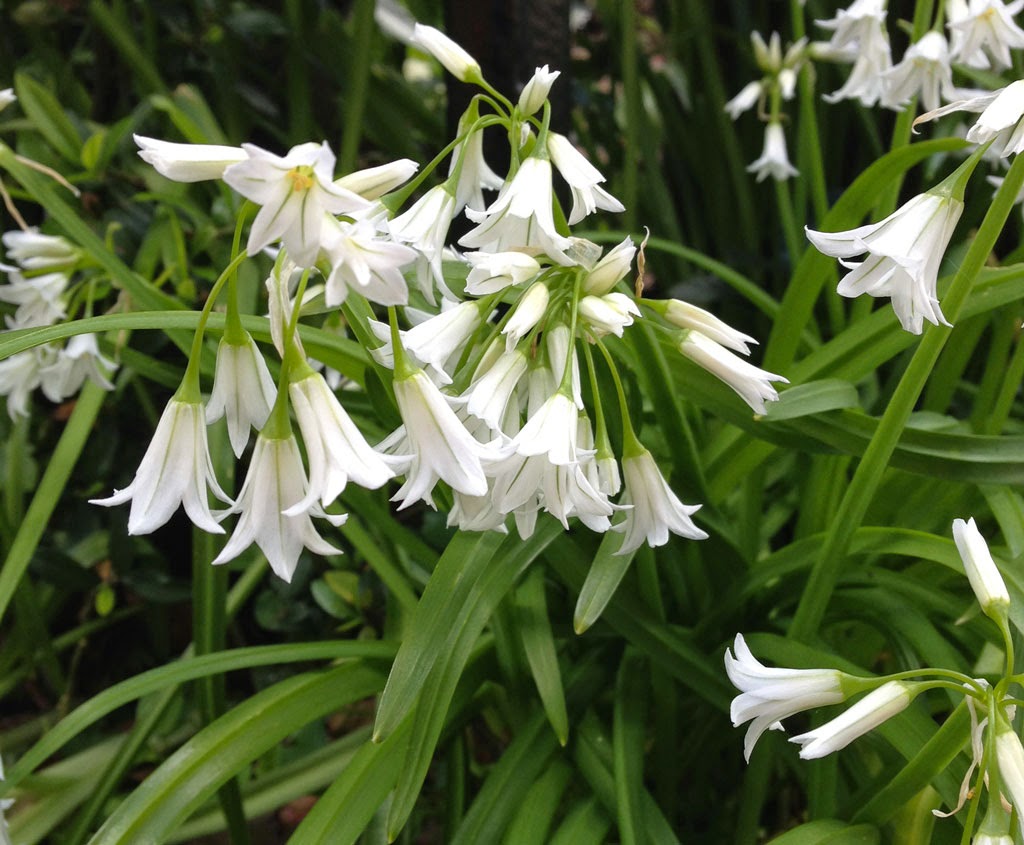 I enjoy a drink. Not in vast liver pickling quantities, but I do get rather excited about a good bottle of prosecco or an earthily lush Scottish whiskey. On the rare occasions where I’ve meekly stumbled into work with a ‘wasn’t expecting that sort of night’ hangover, I’ve worried about projecting an eau de latent-booze sillage. Which makes me wonder… 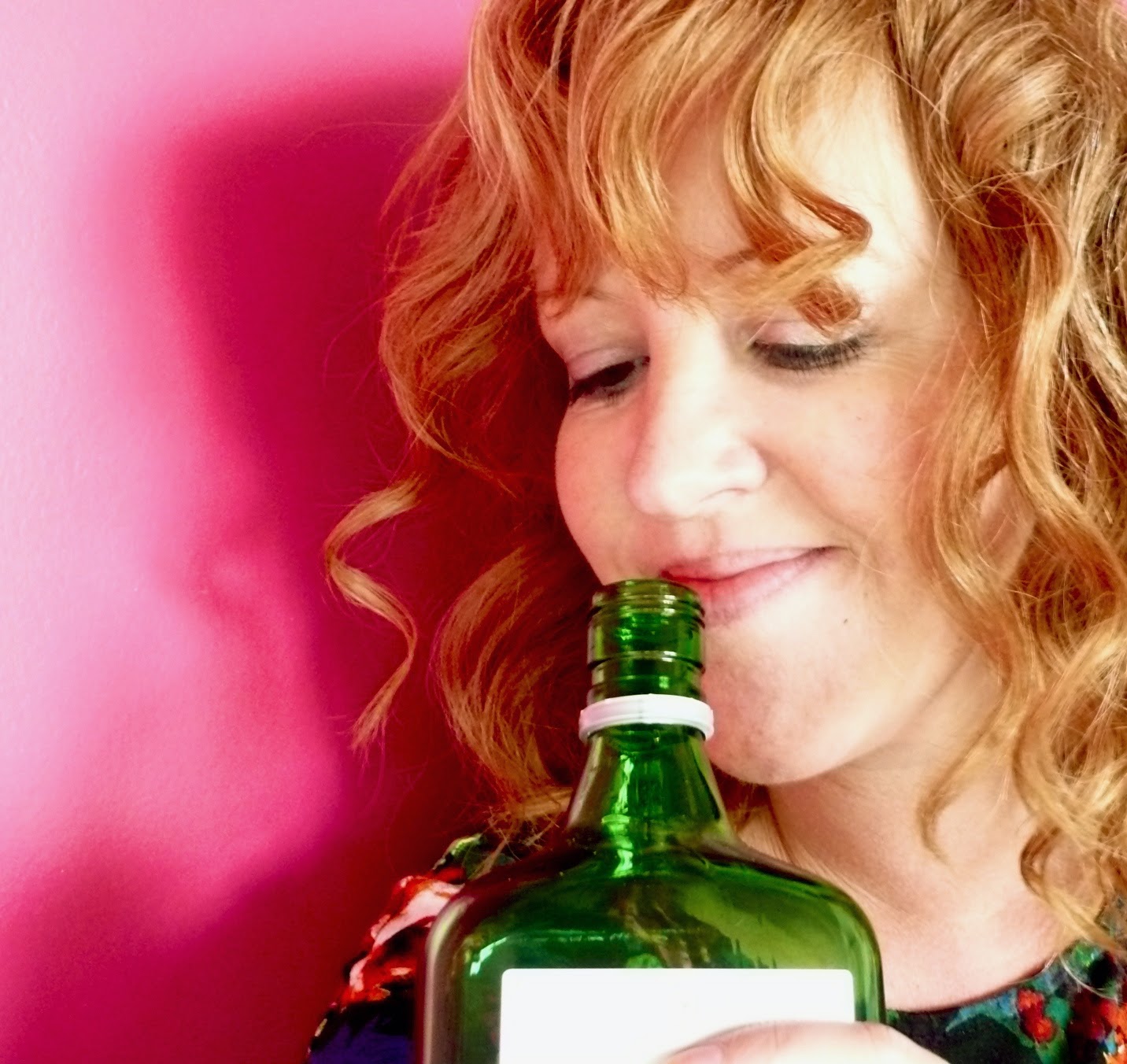 There’s loads of them. Ancient Cognac house Frapin market some of the most favoured booze fumes, with Frapin 1697 and Speakeasy issuing a more powerful rum whiff than a Jamaican theme bar. Guerlain’s latest Aqua Allegoria release, Limon Verde, is an acidicly sunny homage to the Caipairinha cocktail that stirs joyful memories of moonlit dancing somewhat pissed-up on a beach in Portugal. Penhaligon’s and Lubin both created an ode to gin and tonic in Juniper Sling and Gin Fizz respectively. Each echoing the bracing and aromatic refreshment of my favourite pre-dinner tipple. 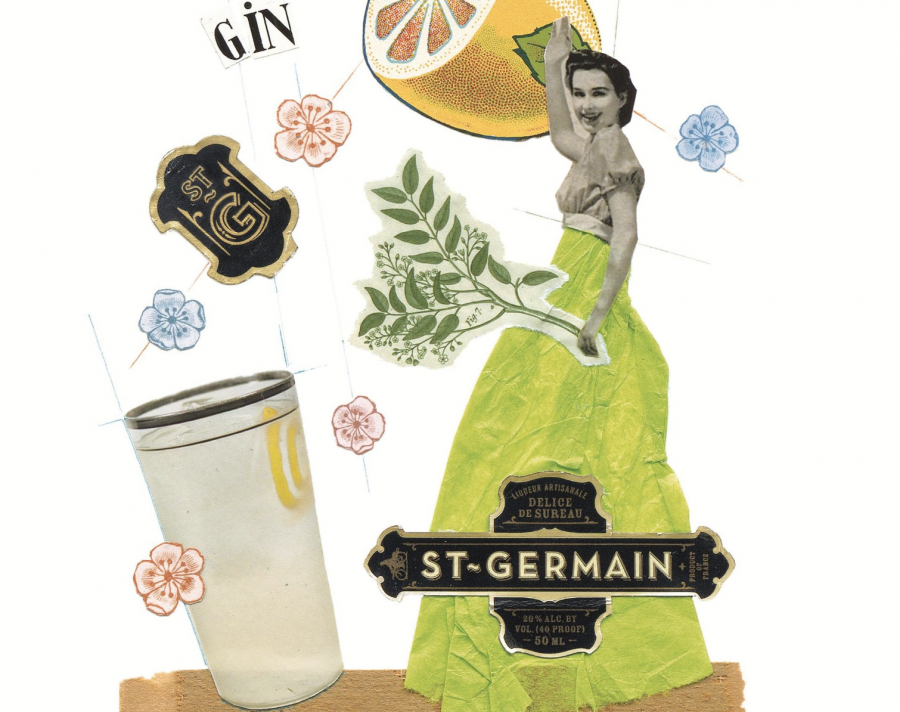 All of these scents use the booze in a subtly blended manner. Neither will provoke a raised eyebrow and a ‘has she been drinking?’ query. However, one that might do is the utterly bonkers Bertrand Duchaufour creation for Penhaligon’s - Tralala.

“Tralala, is the latest fragrance from Penhaligon's inspired by the fantastical universe of Edward Meadham and Benjamin Kirchhoff. An opulent, hedonistic blend created by Master Perfumer Bertrand Duchaufour.” (Penhaligons.com)

Meadham Kirchhoff are an offbeat fashion design duo who paired up with Penhaligon’s to create a scent to echo their spirit – in essence a quirky ‘designer scent’ for this historic perfume house. Their designs are brilliantly weird with all sorts of hyper-references to the glamour of the past. I’m not talking about Hollywood glamour here, unless the film is Tod Browning’s 1932 ‘Freaks’ - a disturbing tale of what happens when the ‘normals’ (not my term) try to diddle the circus ‘freaks’ out of their share of the money. They feel exotically ‘children’s dressing up box’. 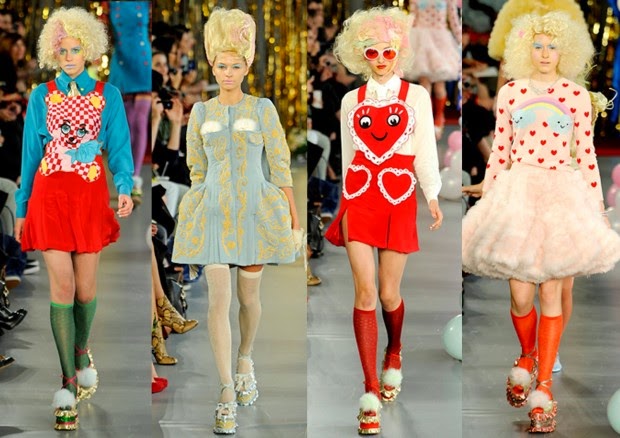 Meadham Kirchhoff designs on the catwalk

Tralala is somewhat ‘trashy’, in a rather superb way. It’s odd booze and confectionary vibe feels glamourous yet childish. The stuff of ‘cheap glamour’, i.e. feather trims, sequins, kaleidoscopic colour, frills, bows and lace, that appeal to the young girl. Give an eight year old girl a feather boa and some sparkly jewelry to play with and she’ll be absorbed in a fantasy world, no matter how much of a tomboy she may be. I had one, and I climbed trees and built dens. It even has a (creepy) dolls head for a lid, no doubt to reawaken a sense of playfulness in our adult lives.

When I first smelt Tralala I was very confused. It smelt both splendid and rancid in equal measures. I loved it, then I hated it, then I loved it again. It seems that with this scent there’s a requirement for a specific mood. I can’t get up and spray it after my morning shower, it would be like quaffing a box of pralines, washed down with a double Laphroiag alongside my Cornflakes. Likewise, it doesn’t work for me as a bed scent, being a little too aldehyde perky for soporific effect. What it does do however, it augment those times when you delve into your grown up dressing up box. It’s a whopping great night out accessory for the times you feel the need to wear something grandly outrageous. Encased within it's own lavish wardrobe, you can literally reach inside and bring Tralala out to play with you. 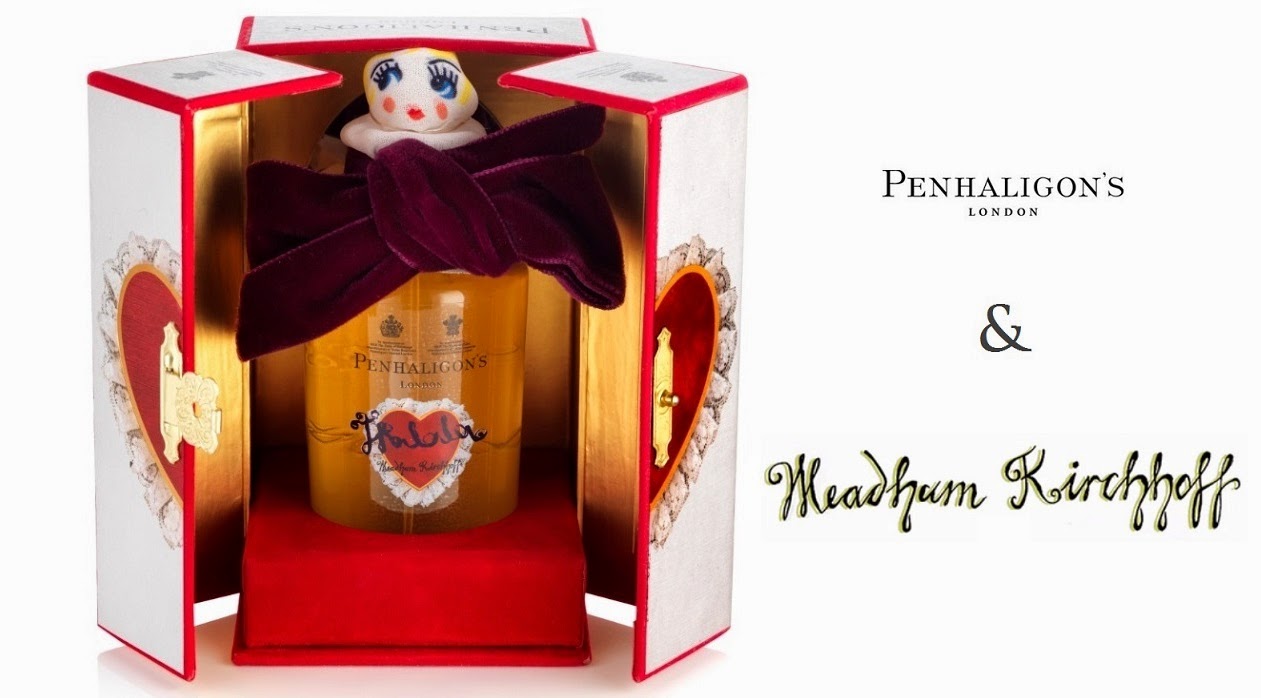 Essentially, it smells of whiskey fudge. So much so that (if donned in a limited edition tartan bow) it would sell marvelously well in the Edinburgh Woollen Mill shops where tourist folk fork out much moollah for cosy cashmere jumpers and kitsch tins of shortbread decorated with rampantly masculine looking stags in a misty glen.

This isn’t a completely gourmand scent though. An aldehyde reigns through the opening, which smells most beguilingly peculiar alongside the sweetness.  I’m used to the sparkling aldehydes of No. 5 and Arpege where the effect is dryly ‘grown-up’. The aldehyde in Tralala serves to freshen what would otherwise be a syrupy sweet opening. Add to this a hint of leather and an edge ‘not actually for children’ appears. It’s a bit like the image of an adult female wearing ankle socks with stiletto heels, slightly kinky.

Ultimately, I prefer Duchaufor’s earlier perfume – Skin on Skin, created for sister company L’ Artisan Parfumeur, due to it’s all occasions wearability. This whiskey and leather scent possesses great similarities to Tralala but replaces the confectionary overload with lavender. It is much more suitable for one who tends to dislike gourmands. However, on the occasions when I dust off the Mac emerald coloured eye shadow and gold flecked body oil, then wobble onto my scarlet platform heels, I’ll be reaching for Tralala to complement the dressing up box excess.

I had my encounter with Tralala courtesy of the lovely Alex Musgrave (AKA The Silver Fox). If you have not yet discovered his scent blog, here is a link. It’s a literary delight.