This week I’ve been flabbergasted by the fragrant marvel of Yves Rocher’s latest addition to the Secret D’Essences range – Secrets D’Essences Neroli. Regular readers will know that I’m a devotee of the ‘killer cheapy’ but the phenomenon of creating something splendid and pricing it under £30 is a rare event. It’s a delight to find one. 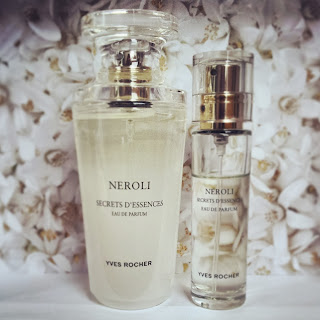 Neroli/orange blossom ‘soliflore’ scents (i.e. scents with a dominant single floral note) have been a significant trend in recent years, with releases such as Tom Ford’s Neroli Portofino and Guerlain’s Nerolia Blanca gaining an enthusiastic following. Of course Neroli has been around for hundreds of years as a key ingredient of the traditional eau de cologne, so it’s revival as a focus note in costly niche perfumery will inevitably lead to comparisons with much cheaper creations. A look at Neroli Portofino’s Fragrantica page shows that 89 readers think it smells like the heritage classic - 4711 Cologne. 4711 costs about £10 for a 50 ml bottle, Neroli Portofino costs upwards of £150. I know which one I’d be testing first.. 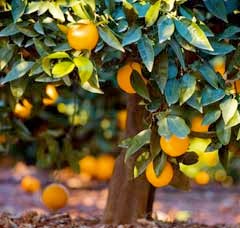 Secrets D’Essences Neroli is not particularly cologne like, yes it does give us that uplifting citrus burst in the top notes, but it’s warmer and muskier than expected. If I were to compare it to another scent I would suggest either Penhaligon’s Castile, Miller Harris’ Petitgrain or Evody’s Fleur D’Oranger.

The note list is rather confusing, it is composed of; orange blossom, neroli, bitter orange, petitgrain and musk. Here’s my potted explanation.

Orange blossom and neroli are exactly the same thing, the flowers of the bitter orange tree. The only difference between the two is the extraction method. I won’t bore you with geeky tech about this but the outcome is that one smells citrus bright, mildly floral and uplifting (neroli) and the other smells slightly citrusy but more indolic white floral, luxuriant and pleasantly slutty (orange blossom). Petitgrain is an extraction from the leaves from the same tree, one of my favourite notes, it is both sharp citrus and woody/oily/soapy. As for the bitter orange, I think this is an essential oil from the rind of the fruit. 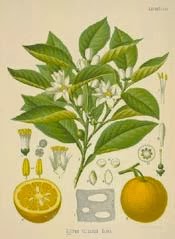 Secrets D’Essences Neroli, unsurprisingly, smells like all of the above. Which is a very fine smell indeed. It manages to be at once luminous and euphoric in the manner of sparkling citrus, whilst retaining a deeper and somewhat saucier element of creamy indole and musk. It lasts for absolutely ages and possesses impressive projection abilities. In fact, on the first day of it’s public wear, I attracted the olfactory interest of a cyclist whilst queuing for a coffee in the park. Said cyclist was a Tom Ford aficionado who was astonished by my admission of it’s price (cue one of those rambling half an hour conversations we fumies get into when we find a stranger who shares our obsession).

Here’s how to buy it. Yves Rocher exists on the high street of most mainland European cities. In the UK and (possibly?) Internationally, you have order from the online shop. Yves Rocher advertise retail prices that are dropped all the time. Expect to pay about 40% less than the rrp during most months. I bought a ‘green dot’ priced gift set of a 50ml bottle and 15 ml purse spray for about £29 (green dot prices don’t change) but currently the £44 50ml bottle is being sold at £24.50.

In addition, Yves Rocher always ask you to choose from a selection of free gifts with each order. Today (this runs out soon as it was the gift that I got nearly a month ago) ‘Surprise gift no.2’ includes the beautiful neroli scented argan oil body balm that layers magnificently with the perfume. 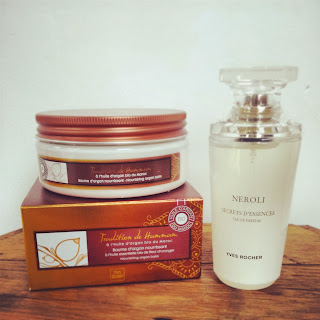 If you are intrigued by this post you might also like to click here to read about some superb quality body products from the same brand that help to amp up the projection and longevity of wimpy scents.
Posted by Sarah Waite at 11:04