Review: Jul et Mad - Terrasse a St-Germain, Recollections Of The Scent Of Love 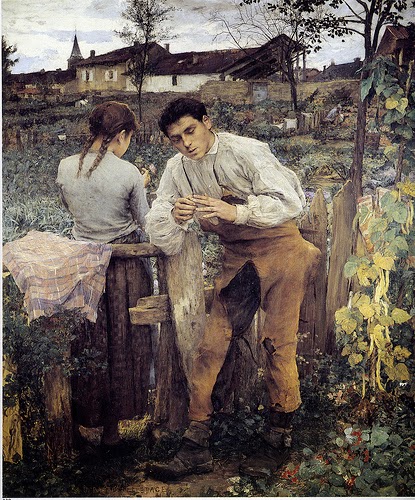 It seems timely that as Valentine’s Day approaches, I contemplate a fragrance inspired by love - Jul et Mad’s Terrasse à St-Germain. The fragrance tells an olfactory story of the moment that the couple behind the brand first encountered each other (no prizes for guessing that it was a breathless moment on a pavement in the Left Bank of Paris). I’ve had my sample for some time now and despite judging it to be one of the most achingly beautiful scents that has found me in the last year, I’ve found it awkward to write about. This is why:

Jul et Mad is a couple. ‘Mad’ is Madalina, a well respected cosmetics and fragrances industry executive. ‘Jul’ is Julien, a scientist and entrepreneur. Both are extremely good looking, well educated, young, internationally travelled and high achieving. Their three perfumes are composed around key moments in their love affair, taking in alluring picturesque locations such as the streets of Paris and New York and a grand palazzo in Venice. They are exceptionally well composed perfumes, inspired by, and this is where it gets difficult – two very fortunate people having a marvellous moment in time. 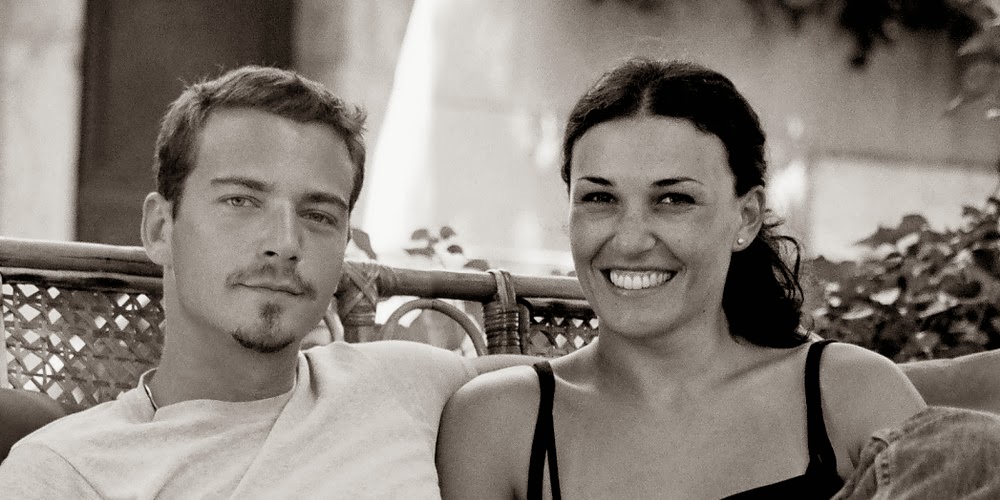 Take literature and cinema, when has a story line ever been enthralling when it features a romance that appears to be perfect? There needs to be a struggle, some conflict to overcome, a resolution to the conflict and a happy ever after/heartbreaking demise. It helps if our protagonists are wrapped up in mystery and beset by tragedy. If Juliet had moved into Romeo’s place shortly after their besotted first meeting and had a brilliant time living it up around Europe, there wouldn’t be a story. Although I find this couple’s narrative beguiling, I desire to know more. 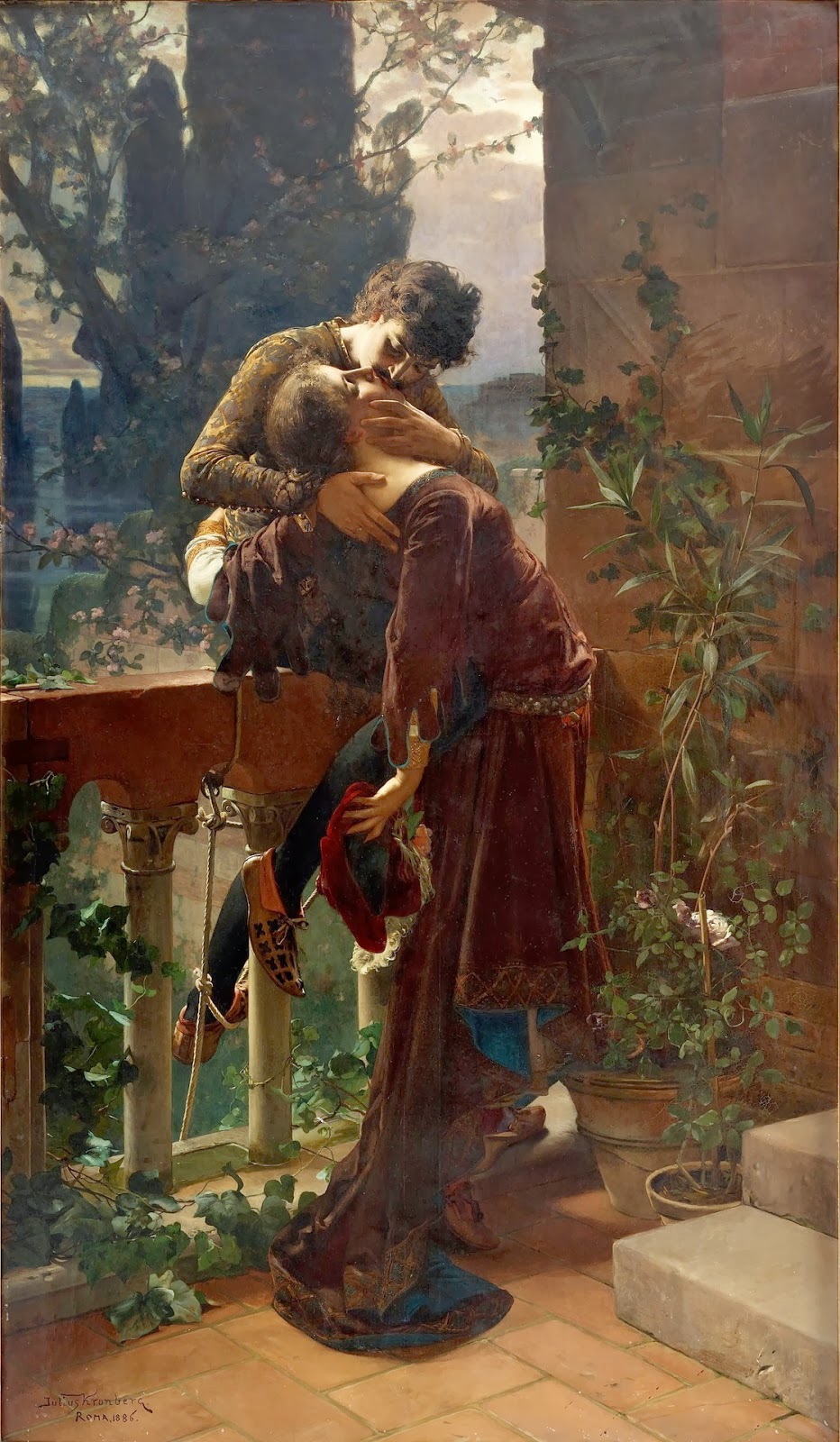 It brought me to thinking about the scents of my own great romance, which alike that of Romeo and Juliet’s, had a rather tragic ending. I won’t be discussing much of the tragic ending the blogosphere but I will reveal some of the moments of splendour and consider, what did our love smell like?

My ex husband, ‘J’, truly was my partner. If I could summon a definition of love, I would describe it as a feeling of utter contentment, where there is no sense of a ‘relationship’ to be analysed and pondered, simply a pairing where two people create an adventure and a life truly lived. In this I recall the feeling of being alive, waking up with an overwhelming sense of optimism and exhilaration. Even if the day ahead would simply consist of a walk along the river park, a marvel at the uniquely fudge coloured potentially hermaphrodite duck, a vinegary wrap of chippy chips and a lazy peruse of the newspapers, with J by my side, this day would still feel blissful.

We were young when we met, just 16. I was at art college with his brother, through whom I met J. We first encountered each other on the dance floor of Jenks, a local indie nightclub in Blackpool. Although a vague memory, we danced in a much crazed state to The Fall’s weirdly bendy single ‘Telephone Thing’. Weirdly bendy more or less summed up J. He was a deeply creative and inventive soul with a soaring imagination which gave him both his magnificent sense of wonder and also his debilitating mental health problems. He didn’t think like other people, and for that, he was enchanting.

J had a really strong scent of man. He didn’t look particularly masculine with his halo of golden brown curls, his pretty ‘cartoon cow’ eyelashes surrounding limpid eyes and a love of vintage girls shirts from the 70s which he could pull off with his slender frame and quirky attitude. He must have had really strapping hormones as showers cleaned him but didn’t take away his musk. He had a definite warm and heady personal smell that I can still recall if I try really hard to bring it back.

We lived in a small Victorian mill town in the hills of West Yorkshire named Otley. Looming large behind our house was the Chevin, a grand hill topped with dense pine woods. We played amongst the pines most weeks, they were our ‘set’ had our romance been a stage production. We picnicked atop a bit of ‘sticky out’ cliff and gazed down at what felt like our kingdom. He kissed me in the woods in the manner of Lady’s Chatterley’s gamekeeper and reduced me to terrified giggles whilst tearing after me in the twilight shrieking of the Judderman. Today, so many years later, the smell of pine needles and mossy bark still transports me to place of both elation and melancholy in equal parts. 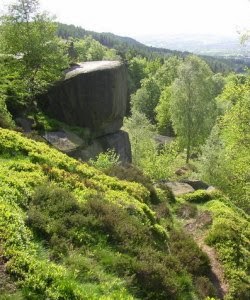 Our sticky out picnic rock

Our first home was a damp and chilly rented flat above a stinking fish and chip shop. Our back yard wore the sad must of mouldy potatoes. I have never felt happier.

J loved perfume, perhaps as much as me. With York in easy reach by train, many a day was spent rooting through it’s fusty junk shops and ‘high reward’ charity shops. Nowadays they are filled with terrible cheap clothing from Asda and Primark, but years ago they’d yield bountiful treasure in the form of characterful 50s silk scarves and J’s aforementioned beloved flamboyant shirts. York possessed a Crabtree and Evelyn shop that sold divine masculine colognes. J bought West Indian Lime Cologne and the original Sandalwood (oh my that was a thing of beauty).

Sadly, these perfumes later concealed the smell of his breakfast-booze, a regular prop for facing a ‘down-day’ in the horrific grip of bi-polar disorder, that eventually led to our demise.

Gulp.. Back to Terrasse à St-Germain:

What I recall most clearly about the onset of our romance was the extraordinary feeling of optimism. Citrus notes have always uplifted me, which is probably why they feature so prominently in my collection. 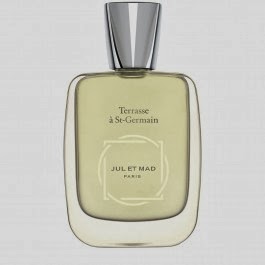 Terrasse à St-Germain projects radiant beams of tangerine, grapefruit and rhubarb, a metaphor for the fizzing excitement of the ‘first glance’ at a future beloved. The floral heart reveals a vintage sensation, perhaps invoking memory and sentimentality, after all, shared histories build love and life. In the note descriptor, a ‘blue’ rose is mentioned. I have no idea what a blue rose smells like but I like to think that it hints at melancholy, bringing balance to the euphoric citrus notes. No romance exists without sadness, even within a blissful 70 year long marriage, someone will ultimately die and leave the other bereft. The base combined of sandalwood and Indonesian patchouli is detectable from start to drydown, with the patchouli delivering it’s familiar associations of a damn fine time in the clutches of bohemia. Maybe it speaks of the late nights of excess that decorate the narrative of the commencement of love stories?

It’s virtually impossible to describe the overall effect of this perfume. It’s the blogger’s nemesis, in that it’s seamless. How do you describe the perfection of a marriage of truly harmonious notes? Perhaps that’s why I find it tough to engage with the tale of Madalina and Julien, they too appear to have achieved a perfect harmony.

If you’ve enjoyed this post (or wept profusely whilst reading it) why not ‘subscribe by email’ in the box on the right hand side, or hit like at:
https://www.facebook.com/odiferess

Finally, I leave you with a truly magnificent love song, The Birds In Your Garden by Pulp.