Can you pass a skip without peeking inside?

A couple of years ago I worked in a historic school that migrated to a new building. The exodus caused a mass ‘chuck out’ as we departed our faded but charming 1930s institution to enter a cramped contemporary design monstrosity.

As I dumped a hoard of broken ring files into one of the numerous skips, I saw a hairy little tail poking out from under the detritus. Curious, I gave it a tug and out popped a rather battered stuffed weasel. We bonded instantly. Upon questioning my colleagues, I discovered that he hailed from the 1940s when a taxidermy display was donated to the school’s Science Department. 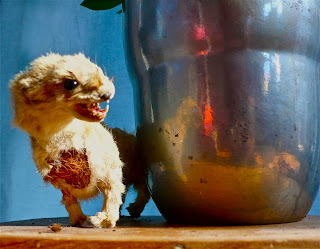 The weasel has suffered years of excited teenage manhandling and a long time in forgotten storage. He was dusty, furless in places and the straw stuffing poked out from his belly. His funny little legs had become bandy and drunken after being yanked from his original stand. Despite this, he was eminently lovable. I named him Manky, apt eh? A note to my international readers – the colloquial manky means ‘funky’ or ‘dirty’. 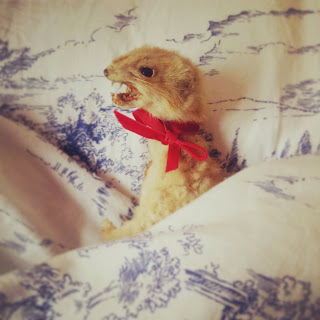 Manky often wears perfume, being rather furry, his coat holds onto scent and makes it lasts for eons. This is a curious way to subtly scent my living room. He is currently sporting Comme de Garcons 2 which smells a little inky. I imagine he'd love to amble amongst the treasures of old book shops. It suits him.

I cherish weasels and indeed all of the musky mustelidae family of creatures; stoats, ferrets, minks, pole cats and pine martens. My first encounter with these beautiful beasts was in the discovery of a ferret rescue stand at a country agricultural fair. If you paid 10 pence you were allowed to hold one for a few minutes. I risked the potential of finger biting and spent several pounds and a good hour in a blissful embrace with these cuddly creatures. Although I think it was really supposed to be a treat for kids.. 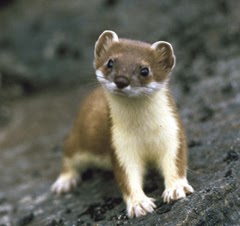 I recently met up with fellow fume writer – Vanessa, the author of the enchanting Bonkers About Perfume blog. We spent a long and joyous afternoon waffling about scent and swopping samples and decants (gaining the curiosity of drinkers in the packed pub who caught thick wafts of the rare and the quirky). Amongst the decants donated by Vanessa, was a little spray of Eau de L’Hermine by Lostmarc’h. The name suggested to me that it was one of those glamorous musky creations that are designed to be worn on a fur coat, the word ermine being another name for the stoat or ‘short tailed weasel’ as it’s also known.

On the day of testing the scent I doused myself liberally and revelled in the vibrant citrus musk. As always at work, citrus scents are valued for their ability to revive my spirits in the often pungent and stale air of the school environment. Although I initially liked it, I didn’t think to save any for a review being as I’ve written plentifully on this genre. At lunchtime I emptied the last of the decant onto my skin and grew increasingly regretful as it developed into something I REALLY liked.

Upon my return home I googled the scent and was gobsmacked to find that Eau de L’Hermine sported a rather dandy illustration of a non-tatty version of Manky running across it’s bottle. I was delighted! If ever a scent was meant for me.. I quickly emailed Vanessa and told her of my obsession with weasels and attached photos of Manky. 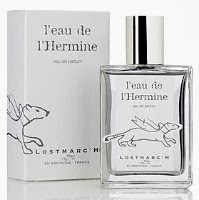 To my surprise, she emailed me back with photos of her beloved Max Rat. “ I raise you Max Rat, the 'vermin with ermine', who I take on my trips and who hails from Hamelin, of Pied Piper fame.  The local beer there is called Rattenkiller, for obvious reasons..” 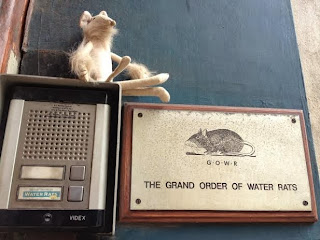 Max Rat travels with Vanessa on her numerous business trips and has even been known to accompany her to the odd gig. This pleased me. I felt that perhaps I wasn’t so alone in my love of an old dead stuffed weasel (charming as he is). The fact that she is over attached to ‘not alive’ verminous pet somehow seems to lessen my own eccentricity.
I won’t review Eau de L’Hermine as Vanessa has done it so eloquently here, plus, I’ve run out! 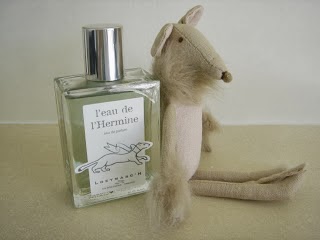 Photos of the delightful Max Rat kindly supplied by Vanessa, photos of Manky daftly posed by myself. Reckon it's a blogger thing?
Posted by Sarah Waite at 09:53