Last week I delivered to my readers a (slightly bonkers) review of a box. To be precise, a garble of words that spoke of my delight at the Olfactive Studio Sample Discovery Kit and it’s superbly designed kinship with the now defunct photography giant Ilford. To read the article click here. So seduced was I that I negated to review it’s contents. So, here are my thoughts on a sample from the box, the picturesque Chambre Noire. 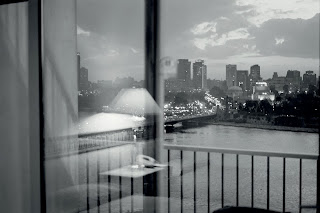 The inspiration for Chambre Noire

Olfactive Studio asked perfumers to create an olfactory interpretation of a photographic image. In Chambre Noire, Perfumer Dorothée Piot responded to Photographer Clémence Réne-Bazin’s atmospheric photograph of a hotel room. The photo speaks of: a hushed retreat from the city, the dark interior space reflecting the vibrancy of the view from the window, a luxuriously rarified environment, the absent or hidden occupant of the room, the oddly ordered and barely visible reflection of the unused beds, the suggestion of a liaison about to occur?
Olfactive studio describe it thus:

“A sensual and mysterious fragrance, Chambre Noire reveals itself from the shadows using the spotlight of the vibrant top note. A fragrance to be shared in the privacy of some far-off hotel room. It reveals its character gradually, exuding sensual notes of leather against a backdrop of warmth and opulence.”

In some sense, it could even be evocative of Guerlain’s iconic L’ Heure Bleue, in that it tells a story of the hour when day turns to night, and the possibilities that arise therein. 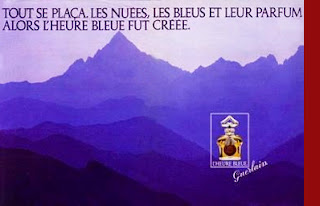 However, typically of my peculiar fragrant associations, the actual scent of Chambre Noire suggested something far less subtle and much more mischievous to me. It transported me back to 80s uber-camp historic pop romp – Adam And The Ants – Stand And Deliver! If you need a reminder, take a look at the mesmerizing video:

You’re probably wondering why am I led into this long forgotten memory? Adam Ant was my first gargantuan crush. Though aged only 8 when this video appeared, my young soul had cottoned on the fact that a beautiful man adorned with tight black leather, a tricorn and cape was the stuff of fantasies. If you were unlucky enough to be held up at gunpoint on your journey, you’d hope that the offending scallywag would posses the swagger and sensuous prancing of the enchanting Adam and hopefully rough you up a bit in the process! 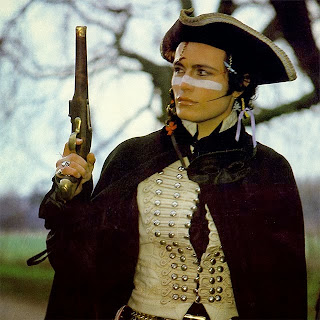 The thing about Chambre Noire is that it smells at once sexy and theatrically camp. It’s essentially a leather fragrance (Adam’s tight pants and ‘puss-in’ boots) with buckets of violet (18th century face powder) and a fruity spice (in the manner of quince, figs and plum wine - the stuff of the feasts of the nobility). Hence why I am transported deep into the world of this dandy highwayman.

I find leather can be a challenging note. At worst it can be utterly feral (as in Etat Libre D’ Orange’s badly cured handbag horror - Vierges et Toreros) or unfeasibly masculine (as in ‘Hummer’ by massive car/tank/idiot-wagon manufacturer Hummer). Leather is rarely what we perceive to be feminine. If it is, it’s feminine in an androgynous or saphic manner, think 'Patti Smith' chain smoking and glowering moodily. What’s so odd about Chambre Noire’s leather is that emits a gentle whiff of gender bending, as delicate and ethereal as Adam’s finely honed cheekbones and glossed lips. Instead of bringing masculinity to a woman, it feminises a man. Add to the leather a rather briny interpretation of amber and you have a subtle suggestion of salty emissions, be they sweat or otherwise. It’s ultimately, a very confusingly sexy smell.

I highly doubt that Olfactive Studio had ever considered a link between Chambre Noire and the dandy swagger of a fantastical highwayman. However, what is certainly true is the fact that scent does collaborate with imagery, so they are pursuing a remarkable concept. In my case, a pop video from my youth made an enduring impression on me that was reawakened by my nose, it is moments like this that make me grateful to smell.