Have you ever contemplated a link between perfumery and witchcraft? I presume it depends upon what your perception of witchcraft actually is/was. I’ve long held a fascination with the concept of ‘the witch’, indeed hailing from Lancashire, my county was famed for the notorious Pendle witch trials in the early 1600s. 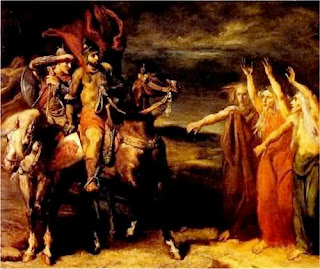 A rather romantic depiction of the witches of Macbeth

Witchcraft was feared as an unholy power, an ability to charm something/someone, enabling it to flourish or to wither, or to cast some personal wish. This was thought to be achieved by some sort of devilish incantation, the aid of a ‘familiar’ (often an animal spirit form such as the ubiquitous black cat) or the use of a magic potion formed from all manner of herbs and voodoo-esque ephemera.

Ancient medicine relied upon the potent power of herbaceous plants to aid recovery. Nicolas Culpeper’s ‘Complete Herbal’ of 1653 gave ordinary folk advice about how to treat common illnesses with easily foraged indigenous plants, a practice that had been going on for many hundreds of years before the book was published. In the Complete Herbal, in addition to treating physical ailments, plants were also recommended to treat ailments of the mind or soul, much in the same way as they are used in contemporary aromatherapy and psycho-aromatic perfumery. Next time you spritz Penhaligon’s Lavandula consider Culpeper’s advice upon the lovely herb:

“Two spoonfuls of the distilled water of the flowers taken, helps them that have lost their voice, as also the tremblings and passions of the heart, and faintings and swooning, not only being drank, but applied to the temples, or nostrils to be smelled unto”

So it doesn’t just smell nice, it can also sort out untimely swoons and histrionics in the presence of your beau.

Equally, as plants could be used to heal, they could also be used to bring about demise. With no such thing as forensic science, a down trodden and abused wife could be rid of her violent husband with the careful administration of a poison over time, “Belladonna apple pie my love?”

Frequently it was the job of a woman to act as the village healer, midwife and general wise sage to whom others could turn to for help. It’s no wonder that during the religious confusion and superstition of the middle ages, she could be thought of as ‘against god’ in that she held the power to give or take life. As Europe was transformed into a superstitious and religiously vehement place during the Protestant Reformation of the 1500s, the practices of a healer would no doubt be under scrutiny as devilish activity.

My own maternal grandmother would have no doubt been tried as a witch with her use of folklore remedies. My mother’s coughs and colds were kept as secret as possible as my grandmother’s primary remedy for this ailment was to wrap her chest in brown paper smeared in goose fat, a grim cure. In her cellar brewed great vats of wines, dubiously created from anything, be it elderflowers or potato peelings. Containing curious detritus and cloudings they were possibly as poisonous as they were intoxicating!

Witches were thought to be able to create a potion, a substance capable of bewitching a person to an ultimate aim such as making them fall in love becoming fevered with amorous intention.  Dsquared borrowed this idea to market their line of ‘Potion’ fragrances, suggesting that the wearer become infallibly attractive as if under a spell. Dior of course utilized the idea of a witchy liquid in the creation of ‘Poison’, hinting at the notion of a dangerous seduction, the dark power of a woman. The apple shaped bottle recalls the poisoned apple that bewitched Snow White, the curse of a jealous vengeful hag. It’s glass was of a deep amethyst, a colour associated with spirituality. 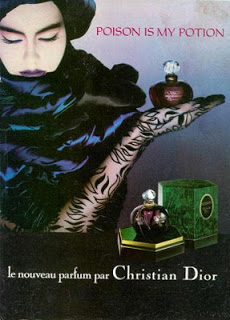 Which brings me to my favourite fragrant witch’s brew, Ormonde Jayne’s Ormonde Woman.
Linda Pilkington, Creative Director of the Ormonde Jayne line looks nothing like a fairy tale witch, with her expensively tailored clothes, bright eyes and lush mane of hair, she is a far cry from a hooked nosed hag. However, as a creator of potions she is a fine witch indeed.

Ormonde Woman, is a forest scent, loaded with earthly pleasures. It is reminiscent of being deep in the woods where the sticky saps and resins come forth from trees and bushes to grace the air with a pagan whiff. The dominant note here is grass, softened by a magnificently earthy vetiver. Indeed if Ormonde Woman holds the bewitching power of a love potion, the carnal act will most certainly take place outdoors, there are no satin sheets for the witch’s brew. This is ‘knickers full of ferns’ stuff. 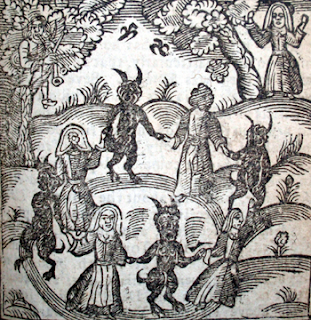 A frolick in the woods

Grassy chypres can be a little cold and astringent but this one projects warmth from it’s ambery base, again adding a sensuality to the already heady concoction. We tend to associate a ‘sexy’ fragrance with the inclusion of grand indolic notes of tuberose or jasmine, perhaps amped up by a dose of animalic musk. This is the opposite. Ormonde Woman’s jasmine is barely traceable, in fact I can’t smell it. I imagine it simply serves to round off a little of the astringency of grass. We don’t need flowers, what could be more arousing than the smell of the forest, where all manner of life abounds in the flourishing vegetation?

The scent is famed for the inclusion of a rare note – black hemlock (or Tsuga). The word hemlock itself connotes witchcraft, as we associate it with ‘poison hemlock’ or Conium maculatum. This herbaceous plant, when ingested in high quantities causes death by paralysis, ultimately leading to respiratory failure, a fine way to see off your accursed enemy! I’d like to see IFRA contend with that one.. Luckily, black hemlock is an entirely different plant, in fact it’s an entirely harmless tree from the conifer family. I couldn’t possibly tell you what it smells like as the woody/grassy notes blend seamlessly into a harmonious brew where nothing ‘pokes out’ as unusual.

So dear readers, what is your opinion? Have you cast a love spell with your fragrance? Or do you use scent to evoke a spiritual meditation? I’d love to hear your thoughts..

If you’ve enjoyed reading this article why not use the ‘subscribe by email’ box on the right hand column to ensure that you never miss a fragrant post. Alternatively, you can hit ‘like’ to receive regular updates at: