Saturday found me fanatically seeking out the new reform of the celebrated but elusive Yohji Homme. I didn’t find it. Selfridges has not yet stocked it yet in Manchester. What I did hit upon however was two marvellously enthusiastic sales assistants and a shrine to perfume junkies courtesy of Dior’s La Collection Privée counter at Selfridges Exchange Square.

I hear stories of snooty SAs frequently though I haven’t really encountered the ‘snooty SA’ phenomenon here in Manchester. Maybe it’s our Northern souls? But ours are friendly, chatty, charming and even tolerant of my frumpy appearance when I’ve rejected stylish clothing in favour of a distinctly outdoorsy hiker’s jacket on days of shockingly Mancunian rain. That said, I’ve not dared approach Chanel wearing Regatta!

What does vary however, is the level of knowledge and/or fanaticism held by the SAs. Some have been employed because they are presentable and personable. Fine, but the ones I like the best are the true perfume lovers, the ones who will spend plentiful time yakking on with me about the wonder of smell, the ones who will impart a little bit of additional knowledge to those of us who could probably already name at least 3 key notes in everything we are given to smell. In short, fellow perfume junkies.

And so it began. Arriving at the niche brands counter, I encountered David who quickly delivered the sad news of the missing Yohji. The disappointment was spirited away with the offer of a spray of Piguet’s new delightfully chewy ‘Alameda’ and a tour around a few of the Maison Francis Kurkdjian fumes.
This is where the fun started. If you’ve smelt his ‘Absolue Pour le Soir’, you may be aware of the ‘unusual’ effect of the initial top notes. I couldn’t possibly repeat my partner Andy’s cutting (and accurate) analysis but if you’ve ever: a) been to Glastonbury, b) camped away from showers/rivers for more than 3 days or c) walked through an alleyway in the city after the pubs close, you’ll know what I’m talking about. The peculiar thing is that I smelt it on the arm of another SA who had applied it a few hours ago and it had transformed into an utterly beautiful honeyed and smoky affair. Now there is nothing I love more than the discovery of a bonkers perfume so this excited me enormously and initiated a quirk fuelled conversation, whereupon I was introduced to his colleague on Dior Privée, Jake.

“Have you smelt our collection before?” he enquired.

I mumbled my response “yes, a few of them, not, erm, properly..” (long gap as my wide eyes lingered on a small bottle labeled ‘Mousse’) Yes, ‘mousse’, alongside ‘labdanum’ and ‘ambergris’! Behind the main counter of full size bottles of Privée fume lies a smaller counter of bottles to play with, a veritable shrine to scent. In addition to bottles of each fragrance in the line, there are bottles of the afore-spotted essences, which to me is the most thrilling thing I can gift to my nose’s experience. 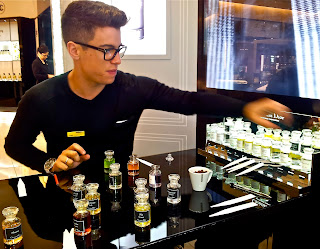 Jake at his table of temptation

‘Mousse’ translates as moss. For me – the heart of my beloved Mitsouko and the base of so many of those thunderingly lovely Carons from the mid twentieth century. With IFRA now restricting the use of Oakmoss in contemporary fragrances, we seem to have become obsessed with this long adored earthy note.

And so it was that Jake encouraged me to have a good play with the essences, this is how they smelt:

Mousse: slightly bitter yet soft, earthy (wet soil?), green without any astringency – a little like a gentle vetiver note, slight underlying sweetness, edge of smokiness, definite ‘bark’ feeling. I’m now smelling the card 5 days later and it’s dried to one of the most extraordinarily wonderful things I’ve ever smelt.

Labdanum: Surprisingly different to what I’d imagined. As a key ingredient to ‘amber’ bases I’d imagined it to be a dark, syrupy and resinous scent but what I smelt instead was a sharp edged wood – similar to cedar or oud in their pure state. Despite being a wood devotee, this was my least favourite as a single note.

I think that by this point (where I must have displayed toddler style excitement, manic eyes and unusually fast speech), Jake had clearly understood that I was a note geek and a fume junkie. Which is where we relaxed on comfortable chairs into a long leisurely sample of all the fragrances.

My tour of the collection was a collective play time, with Jake, David, Andy and I fast firing observations, memories and opinions at each other in the manner of people who genuinely care about fragrance. At times I tuned out as the joy of holding blotter to nose overtook and rendered me momentarily lost in fragrant space. Chat merged from the Dior friendly i.e. Talk of perfumers, innovation and design history, though to the less comfortable, courtesy of Andy who raised the sore point of Christian Dior’s dubious role in encouraging women back into traditional glamorous wife roles after their foray into doing something useful during WW2!
So what of the fragrances? I was impressed. I don’t know why I haven’t given this line much consideration in the past. Perhaps it’s the fact that I prefer to smell something that will give me change from £100 if I actually buy it. Though with the large size of the bottles (starting at 125 ml), they are in fact a fairly reasonable price per ml for niche perfumery. The promotional booklet that I was given (a luxuriously illustrated delight in itself) states:

“A collection of rare, authentic, refined fragrances for both men and women, composed with noble and rigorously selected ingredients. These are true olfactory creations, with a flower at the heart of each, a signature of Dior fragrances.”

The range is eclectic, featuring both current trends (interpretations of patchouli, amber and oud) and more excitingly, some curious creatures. Here are my favourites:

Eau Noire: It had me at first whiff. Regular Odiferess readers will have already ascertained that the words ‘liqourice’ and ‘lavender’ render me babbling with joy. This fragrance uses them to great effect ands adds to the combination a curious ‘curry’ note which I assume could be a whiff of Immortelle flower. It reminds me a little of Parfum D Empire’s ‘Fougere Bengale’, although it’s more subtle and less International supermarket flavoured. Eau Noire represents a daring side to the collection, as everyone will happily plump for an oud or an amber these days but it will take a sense of adventure to wear this curiously charming concoction. Interestingly, it’s perfumer is Francis Kurkdjian, of the aforementioned Glastonbury-esque scent. Personally, I adore it and I hope it’s eccentricity doesn’t make it one for discontinuation.

New Look 1947: My initial reaction was ‘boring pleasant floral’. I shouldn’t like this. It has all the ingredients of an Odiferess yawn. However, I was gifted a little sample and after applying it to skin I can honestly say it’s a stunner. Creamy, woody and floral in the ‘non screechy’ vein, it purrs sensuality. I feel that overtly feminine florals do tend to create an olfactory image of the type of woman that might wear it. This reminds me of Diana Dors – a buxom blonde bombshell with a sense of humour and a waist small enough to squeeze into one of Monsieur Dior’s curvaceous gowns.

Mitzah: An enormous lush spice bomb reminiscent of Lauder’s Cinnabar or Luten’s Arabie. Immensely heady and loud in all the right ways.

I was less enamoured by:

Patchouli Imperial: An almost aquatic take on Patchouli with a lot of coriander. Very bright and peppery and largely missing the sandalwood detailed in the booklet. I see it as a fresh masculine fragrance that would be pleasant in hot weather but it’s not particularly exciting. 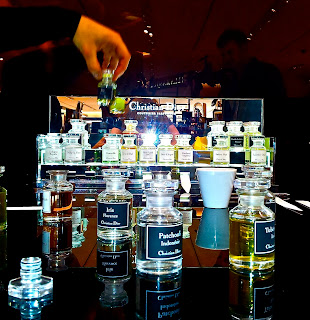 I will certainly re-visit Dior Privée to explore the fragrances that I can’t remember, armed with (good tip alert) some teeny plastic bags to retain the smell of the blotters. I think Eau Noire deserves a full review in it’s own right so keep your eyes out in upcoming articles. Jake and David - if you read this article, thank you for a wonderful afternoon, it was junkie heaven.

In traditional Mancunian shopping style, our day ended with a beer garden pint at Sinclair’s Oyster Bar (handily located outside Selfridges and Harvey Nichs) where we sniffed at Andy’s bargain sale purchase of Gaultier’s Kokorico (£18!) and discussed the cherubic skin of Sales Assistants. How do those boys look so radiant? 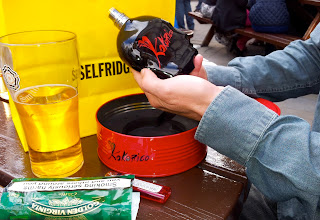